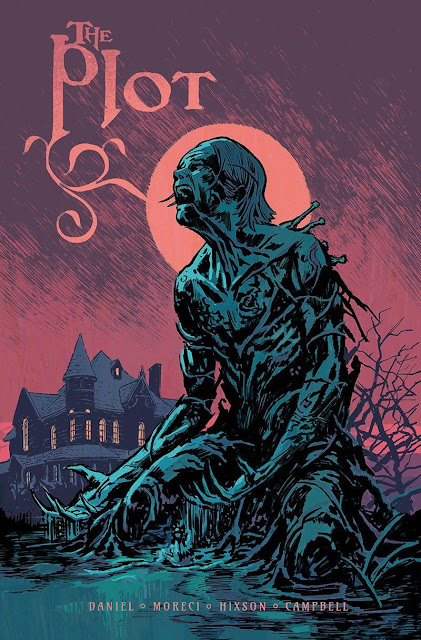 “In order to receive… first you must give.” That’s the motto of Blaine family patriarch, expressed in the flashback scene that starts out this, the first issue of a paradoxically fresh-yet-old-school horror comic called The Plot. By the time you’ve finished reading this intriguing debut, you’ll have a sneaking suspicion that the comic’s creators will be wringing out a whole lot of sinister meaning from these eight simple words.

The Plot is the first series in Vault Comics’ planned Nightfall imprint, which will publish one new self-contained horror-related limited series every year, sort of like a comic book version of AMC’s hugely successful American Horror Story franchise. It’s a nifty concept that I’d like to see more imprints and creators try out.

The first issue sets up a pretty classic horrific Americana narrative, complete with a multi-generational curse, a big old remote family pile surrounded by swampy woodlands on Maine’s chilly, windswept coastline, and, of course, a monster… and I doubt I’m spoiling things by telling you this, as said creature features prominently on the cover.

After the intro, we jump ahead a couple decades, with prodigal son Chase having to step up and take charge after his brother and sister-in-law are brutally murdered by the aforementioned monster, leaving their children, McKenzie and Zach, in Chase's charge. By the end of the issue, we’re left to wonder whether Chase is the best man for the job, whether there’s something weird going on with the kids, and whether we can trust what we’re being shown via Hixson’s funky, chunky panels (which sort of remind this reviewer of an elevated, moodier, “adult” version of Steve Ditko’s work for horror titles by the likes of Gold Key and Charlton).

If you feel you simply must know more before deciding on whether or not to pick up this title, here’s a great, in-depth look at The Plot from our friends at Comic Book Yeti. It really tells you pretty much everything anyone could ever want to know about the book and its creators. 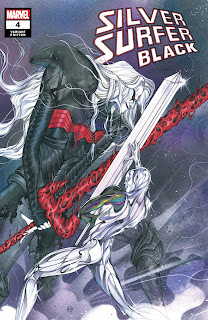 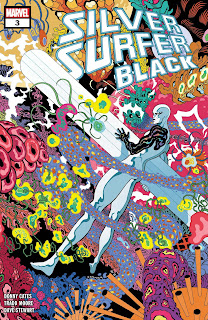 This series continues to amaze and delight in equal measure. If you are any sort of comic book and/or superhero fan at all, you owe it to yourself to be picking up Silver Surfer: Black. Although now that the series is completed (the fifth issue came out last Wednesday, and it’s waiting for me in my pull box at The Beguiling), you’re probably going to want to wait for the trade paperback collecting all five issues in a single volume.


Because I have yet to read this limited series’ final issue, I don’t have much to say about issues 3 and 4 for now, except to declare that a more perfect wedding of narrative and illustrative talents, I haven’t experienced in living memory; particularly not in a title from a mainstream publisher!

If you can still pick up all five issues at your local comics shop for cover price (or close to it), I would do so. I have a sneaking suspicion Marvel might not have known the potency of this work of alchemical comics genius when they first decided to put it out, and may have underprinted the first couple issues. I generally don’t worry about the speculators’ game, except when it’s instantaneous, like with that whole "Batman’s penis" scandal from last year that made my copies of Batman Damned #1 go up in value by 2000% pretty much overnight! 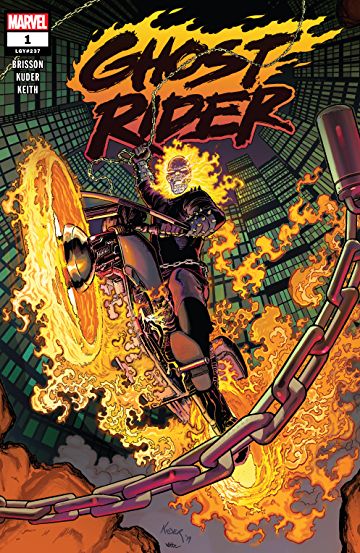 Speaking of a beautiful matching of story and art, cult favorite character Ghost Rider has rarely been served better than he is currently being served by the creative team of Brisson and Kuder.

In the inaugural issue of this newly minted title, we are treated to not one, but TWO flaming skull-headed badasses! With the original Johnny Blaze currently the acting King of Hell (which makes him more of a warden, considering how ornery his constituency can be), up topside, Johnny’s brother Danny Ketch has had to fill in by donning the mantle of Earth’s Spirit of Vengeance, even though all he wants to do is run his new bar, The Fadeaway, and drink himself into oblivion.

So that’s the setup for this, a sort of soft reboot of Ghost Rider's continuity, which has gotten pretty convoluted over the past few years. In this issue, we see that Johnny is having a bit of a rough time ruling Hell after successfully usurping the throne from Mephisto in the recently completed “Damnation” cross-title event.

On top of all the other big-time Lords of Darkness looking to steal Hell out from under Johnny’s wheels (as well as all the incredible powers that come with ruling Hell), lower-level demons are constantly trying to escape into the surface world. This issue sees Johnny asking for Danny’s assistance in chasing down the escapees.

It all makes for a lot of really gorgeously-rendered comic book fun, and I personally enjoyed every goofy, monster-stuffed page of it. And it seems like the creators are having a lot of fun with it, too. I’ll definitely be picking up this title for the next little while! 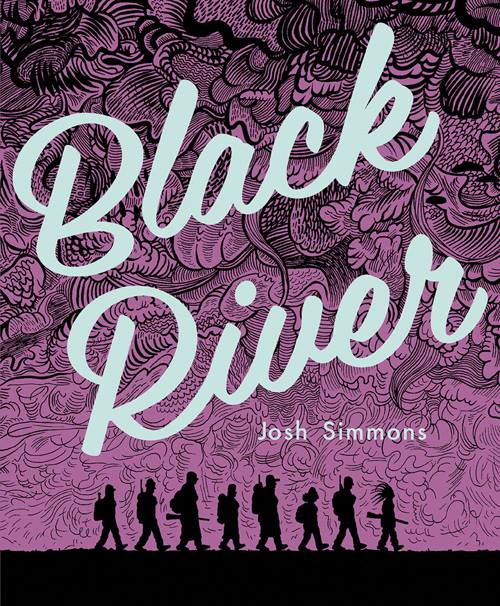 With my recent review of his collection of graphic short pieces The Furry Trap, I made no secret of my admiration for the work of Josh Simmons. 2015's Black River does nothing to dampen my enthusiasm.

Telling the bleak, often disturbing post-Apocalyptic story of a group of wandering women (and one man) in search of a city where rumor has it everyone helps each other out and the electricity still flows, Black River makes a perfect companion piece to Cormac McCarthy's novel, The Road. In fact, if there was a way to somehow get a copy out to McCarthy, I'd love to find out what he makes of this unique and unsparingly nihilistic chronicle.

I don't want to say too much about this book, because it's my fervent hope that many of you will seek it out, buy it, and read it. And I don't want to spoil it for those hypothetical people.

One last thing, about the book's title, seeing as there doesn't seem to be any particularly important "black river" in the story. I believe that it was Simmons' intention to use the title to describe life in the post-Apocalyptic world that he depicts as a river of black... a never-ending, unrelenting, unbroken continuity of ever-flowing darkness. 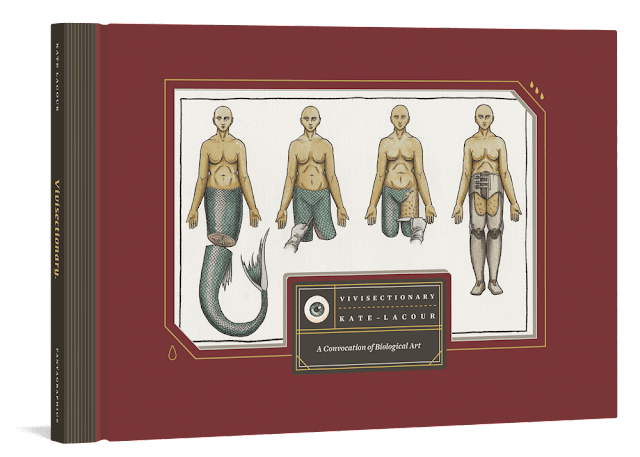 According to the Fantagraphics page on this book:

From "vivisection," the act of dissecting living specimens, and "bestiary," a compendium of real and mythical creatures. A series of visual sequential experiments in the physiological, the pathological, and the occult. A bizarre and mesmerizing investigation through the marvels of biology and myth to uncover the extraordinary in the ordinary, the magic in science, the sublime in the grotesque.

I picked up this book because I love this kind of thing... an intriguing, surreal, and beautiful presentation that touches on the occult and the horrific, all wrapped up in a gorgeous and unique package. The front cover, for instance, is mostly a hole!

Much like the book that it most closely resembles, that being the legendary Codex Seraphinianus (full PDF available here), there's no story here, therefore I have nothing much to say about it, except to declare that Kate Lacour is an artist with an admirably twisted mind. It's rare that I find art that offers me even the mildest of shocks these days, and Lacour succeeds in disturbing on more than a few occasions. Consider that either a recommendation or a warning, it's entirely up to you.

If you'd like to buy a copy of this book, you can do so through my Amazon affiliate link, or not. Again, it's entirely up to you. For now, I will leave you with some intriguing images from Lacour's bizarre (and quite affordable) tome... 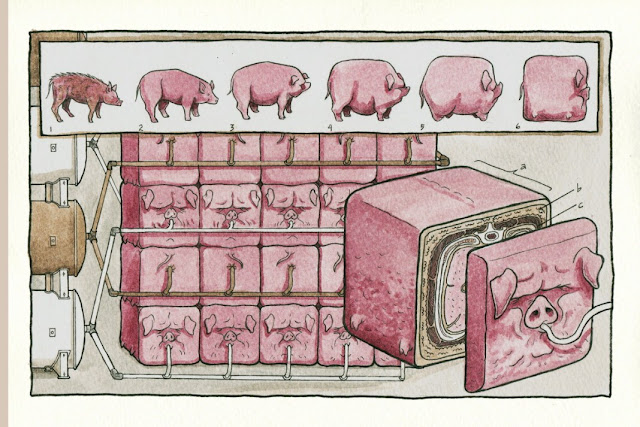 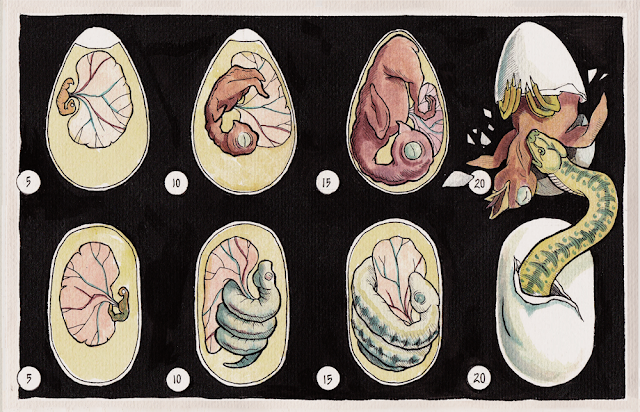 Posted by Jerky LeBoeuf at 2:43 AM