Yesterday, all six episodes of the Fourth Season of BLACK MIRROR finally reached Netflix, and as a huge fan of that show (and Charlie Brooker's work in general), I couldn't be more pleased. And so, I have decided to review each episode in order, as I watch them, and share my thoughts with all of you here on the Mediavore. Enjoy! - Jerky 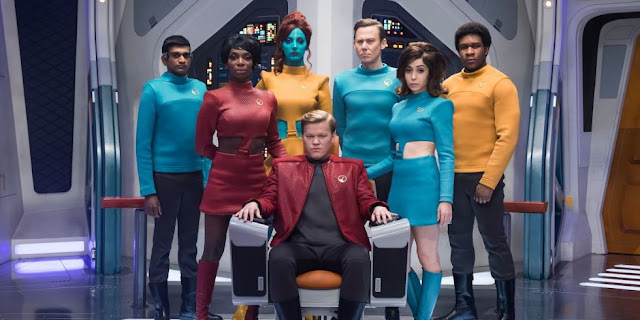 With “USS Callister”, the first episode of Black Mirror’s fourth season—if you’re watching the episodes in their semi-official, “suggested” order—Charlie Brooker and Co. have decided to kick things off with a bit of a dud.

Not that it’s bad. If this were an episode of any other anthology series, it would rightly be considered high grade entertainment. The actors all acquit themselves nicely, and the production values are great, with some truly excellent special effects. It’s just that… well, it doesn’t have that Black Mirror feeling.

Which is odd, because at first glance, this episode appears to build directly on concepts introduced in two previous Black Mirror episodes: “San Junipero” and “White Christmas”. And it certainly isn’t lacking in Brooker’s trademark misanthropic cynicism, what with videogame developer Daly, an apparently mild-mannered doormat who secretly harbours a serious sadistic streak, being the most unambiguously nasty lead character in series history.

Maybe therein lies the problem. Because there’s been far more to Black Mirror than just eyeballs hazing over and intermittent stabs of nihilistic ugliness. Perhaps one of the most powerful weapons in Brooker’s arsenal up until now has been precisely the kind of ambiguity that is sorely lacking in “USS Callister”, with its stark, binary set of good guys and bad guys.

The above could probably be forgiven if the speculative, “hard science” elements of the story were exceptional. Unfortunately, this episode more than any other in the series stretches the viewer’s willing suspension of disbelief to the breaking point and beyond.

The worst example is the mechanism by which Daly acquires, then inserts, his victims into the game world of Infinity, the episode’s stand-in game for No Man’s Sky… or, at least a stand-in for the game that No Man’s Sky was hyped to be, before reality came crashing down around it like so many Tetris blocks. It feels lazy and rushed, particularly when compared to how the same issue was handled in the magnificent “White Christmas” episode.

It should go without saying, but the idea that our DNA contains an up to the minute model of our identity and memories is farcical, and even sci-fi writers of the 1960’s wouldn’t have taken such laughable liberties with technology.

Actually, there’s a lot about the technology in “USS Callister” that seems poorly conceptualized. Seeing as it was created by a former videogame critic (Brooker), it’s actually quite puzzling to me that the game seems so boring and uninvolved. I don’t think I know anybody who would want to play Infinity, no matter how big a Star Trek—I mean “Space Fleet” fan they might be.

Another issue is the lack of consistency. At one point in the episode, it’s made quite clear that the victims have no real power in the game world. The buttons on the consoles are meaningless. Randomly punching any button will perform whatever task it is that Daly has most recently asked his underlings to perform. But later on, Walton manages a heroic, self-sacrificing “fix” of the ship’s engines.

And then there's the problem of the unrealistic level of time compression necessary in order for the crew's big plan to have any chance of working. The idea that they could put into motion a plan to blackmail the real-world Nanette with some racy photos, have Nanatte run around gathering all the necessary equipment, then make her way to Daly's apartment, where they have her break in and snoop around while he's still in there, then have her order a pizza, and have the pizza be delivered, all while their AI versions are listlessly frolicking in alien waters... that borders on Game of Thrones Season Seven levels of not giving a fuck about timelines just as long as it makes for "cool TV bro".

That said, the episode is not without its charms. As previously mentioned, the actors are game. And the episode looks fantastic, both in game and in the real world. There are also a bunch of in jokes and Easter eggs that fans of science fiction will have fun picking out, including an episode ending coda involving an upgrade that references a certain contemporary auteur's love of lens flare. And yes, some of the ideas about the ways in which highly advanced AIs might one day be able to interact with (and wreak havoc upon?) the “real world” from inside a simulation are very much worth developing further.

Unfortunately, “USS Callister” doesn’t do that. It takes the easy way out, again and again, all in the service of advancing what is otherwise a pretty standard Matrix-style Twilight Zone episode, and to deliver a lesson—that nerdy White tech guys often harbor reprehensible notions—that isn’t likely to be blowing anyone’s mind at this point, here on the eve of the year 2018.

To sum up, “USS Callister” instantly ties the second season’s “The Waldo Moment” for my least favorite Black Mirror episode. I hope the creators’ suggestion that it be the first watch of the new season has something to do with them recognizing its shortcomings, and that the season only gets better from hereon out.
Posted by Jerky LeBoeuf at 5:12 PM No comments:

If you're like me, all you know about Joe Don Baker's filmography are his two appearances in films that were given the Mystery Science Theater 3000 treatment, where Joe, Mike and the Bots take turns savaging him over everything from his weight issue to his limited acting range. Perhaps that's why I found this footage of Baker being a genuine cinematic bad-ass in the 1975 film Framed so jarring. Also contains one of the most brain-scramblingly dangerous stunts ever caught on camera. It's enough to make you wonder whether the stuntman was able to walk away afterwards.

Posted by Jerky LeBoeuf at 7:15 PM No comments: 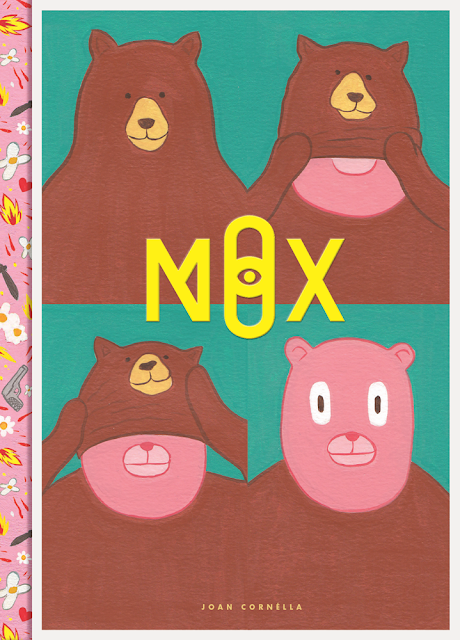 Monoglots, rejoice! You don't have to be able to read Spanish to enjoy Joan Cornella's beautifully painted, multi-panel, single page comic strips. That's because this Spanish artist has chosen to leave her work wordless, a decision that ends up making just as much artistic sense as it does from a marketing standpoint.

Mute as they are, Cornella's little stories practically scream for attention. Paradoxical in every conceivable way, these delicately savage non-allegories often achieve a near transcendent level of surrealism, displaying a paradoxically violent beauty via Cornella's delicately simple representation. 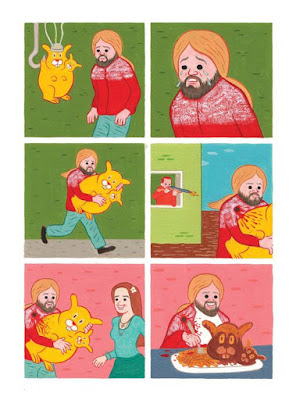 The gags don't always land, but they certainly do often enough to warrant giving each and every one of them the benefit of the doubt. And even the pages that fall flat often still contain something that makes them worthwhile... a strikingly beautiful design element, for instance, or a never-before-seen juxtaposition that stays with you, like an odd passing glance from a stranger on the street.

The book itself is also a thing of beauty. Bibliophiles will marvel at the design work that Cornella's North American publishers, Fantagraphics, have put into this product. Producing adult-oriented content with the colorful sturdiness and rugged durability of the best in children's publishing is a brilliant idea, and it's one that I hope more publishers will consider copying.

Ultimately, what we have here is a traditional European style "funny book" that can also easily be considered a collection of postmodernist sequential paintings that builds on the surrealist traditions of Dali and Bunuel. Fantagraphics is to be commended for helping to spread this artist's work beyond her home continent of Europe, and for making MOX NOX such a ridiculously low-priced bargain.
If you're thinking about purchasing MOX NOX via Amazon.com, please consider doing so through the links provided here. Much obliged!


Posted by Jerky LeBoeuf at 1:16 AM No comments: 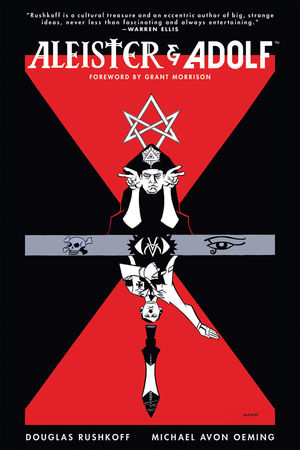 Noted "ideas man" and branding expert Douglas Rushkoff, perhaps best known for writing multiple bestsellers in which he coined the terms "viral media" and "social capital", is a man of many interests and talents. Among his interests are the Western esoteric tradition, and among his talents, storytelling.

Rushkoff's latest graphic novel is Aleister & Adolf, and it is competently rendered in occasionally impressive chiaroscuro by Michael Avon Oeming. It synthesizes the author's interests in a brief and breezy time-and-globe-hopping neo-noir mystery that centers on the secret symbolism of a venerable corporate logo. This is territory Rushkoff knows well.

By the time all is revealed, our reluctant investigator (and his mid-century counterpart) will have stumbled across the existence of World War II's forgotten battlefield, where Astral war was waged by crazy old men in esoteric brotherhoods wielding their ceremonially amplified wills like magickal WMD.

All in all, this book makes for fun stuff, particularly if you're intrigued by the Third Reich's obsession with occult artifacts and other such Theosophical nonsense. The fact that much of this story is based on historical fact makes it all the more compelling.

Aleister & Adolf is published by Dark Horse, and is available both in a sweet-looking hardcover edition or as an e-book over at Amazon.com. If you're gonna buy the thing, use the link I just provided, please!
Posted by Jerky LeBoeuf at 11:56 PM No comments: