JODOROWSKY IN CONVERSATION WITH ARANOFSKY... WOW!

Posted by Jerky LeBoeuf at 9:45 AM No comments:

Wes Anderson is a singular talent, with each of his films being utterly unique and distinct from each other, and yet always stamped with his highly controlled aesthetic. It's been a couple years since his last, the triumphant Grand Budapest Hotel, and now we know that he's chosen to follow up that triumph with his second run at stop motion animation after 2009's underwhelming The Fantastic Mr Fox. Fortunately, if the trailer is anything to go by, Isle of Dogs seems like an altogether different beast; less Beatrix Potter meets Oceans 11 and more George Orwell getting the contemporary Anime treatment. It seems to be set in a near future dystopian Japan where all the dogs have been banished to a trash island, where they have apparently learned to speak English. It's definitely at the top of my Must See list for 2018!

Posted by Jerky LeBoeuf at 10:47 AM No comments:

NEW GIALLO FROM THE MAKERS OF 'AMER'

Fans of gorgeously baroque, violent grindhouse/arthouse cinema, rejoice! Hélène Cattet and Bruno Forzani have a new film coming out. It's called Laissez Bronzer les Cadavres ("Let the Corpses Tan") and it looks like a real humdinger!

Posted by Jerky LeBoeuf at 10:33 AM No comments:

MY PROBLEM WITH PEARL JAM


Although I can’t recall ever having been confrontational or evangelical about it, I have never been a fan of Pearl Jam... the early stuff in particular. In the main, I believe this lifelong beef was initially triggered by seven words: “Clearly I remember picking on the boy.”

Within the context of the song "Jeremy", it was a de facto declaration that Eddie Vedder--the band's lead singer, who also happens to have a perfect bully’s name--placed himself squarely on the side of the Normals, the Jocks, the Popular Kids, the In Crowd.

And the rest of the lyrics aren't much better. The song starts out with some dime-store psychoanalysis, chock-a-block with a teetering pile of hastily lashed-together cliches, to which the obviously expensive and equally embarrassing video adds a number that remain unsung.


Troubled kid draws disturbing shit, yes. Daddy is a big empty suit, uh-huh. Yeah. Running shirtless through the woods. Yes, yes. "An affluent suburb", yes. "It is very relevant in America today", yes, of course. And yes, big angry wolf devouring sad lonely boy. And all, or most of it, is Mommy's fault. And Eddie behind it all, rocking himself back and forth as his eyes roll back, up into his skull, every muscle in his face a-twitch with dynamic tension, his hands flashing obscure signs in the air... Deep, man.

WOW, does that video ever suck. I'm sure Vedder must find it excruciating to watch today. Hell, maybe this video is what made the band decide to never ever make videos ever again (a promise they've mostly kept). What possible artistic justification could there be for the way Vedder contorts his face like that? He goes through a series of grimacing expressions, equal parts painful and goofy, that would make Jim Carrey cringe.

Anyway, back to the song, where we're just getting to the good parts...


Clearly I remember picking on the boy
He seemed a harmless little fuck
But we unleashed a lion
Gnashed his teeth and bit the recess lady's breast
How could I forget?
And he hit me with a surprise left
My jaw left hurting, dropped wide open
Just like the day, oh, like the day I heard


Vedder puts himself at the center of the action, having the unmitigated audacity to make himself the subject of a song that is supposed to be about a boy who commits a brutal, public suicide in the middle of a packed classroom. This, after essentially confessing to being one of the bullies who causes Jeremy’s suicidal hopelessness!

Consider the casual cruelty implicit in the lyrics above. If Jeremy was such a harmless little fuck, then what possible reason could Vedder (or whoever Vedder is meant to be voicing for the duration of this song) have for tormenting him into killing himself?

Furthermore, Vedder seems to relish reliving his "fight" with Jeremy. He sounds almost prideful as he recalls how he helped to "unleash a lion", and indulges in a muscle memory re-enactment of the fight, swinging his fists and pulling angry faces in a way that is bound to be familiar to anyone who's ever run afoul of an angry jock in high school.

And finally, adding one final insult to a long list of injuries--which ends, we are again wont to point out, with a young man killing himself--Vedder has the gall to link the surprise he felt at Jeremy fighting back (his jaw dropped) with the surprise he felt upon hearing that Jeremy had committed suicide in front of his classmates (his jaw dropped).

And then, the song ends with the following verbal flourish:

It's not "think about Jeremy, what happened to him, what he did"; it's "think about this awesome, kick-ass anecdote I just laid on you, dude... TRY to forget that shit!" It's the prideful boast of a bully using the tragedy of his victim's ultimate act of self-negation to make himself seem cooler, more dangerous, in the listener's mind.

The lyrics to "Jeremy" are the ultimate expression of the kind of solipsistic narcissism that leads some people to try and make themselves the central focus of whatever public tragedy is going down.

Think back a couple decades, back to heyday of schoolhouse massacres. In "Jeremy", Vedder is the equivalent of all those telegenic teens who either sought, or were sought out by, local TV news cameras, whereupon they would tearfully relate their gripping (and frequently exaggerated) tales about coming face to face with the killers in the hallway, only to be saved by a miraculous gun jam, or about how a passing bullet came so close it combed a new part in their hair, or about how they calmly tried to talk the killer down only to be rebuffed with a diabolical cackle and a command to “SAY YOU LOVE SATAN!”

All this, even as the bodies of actual victims, dead children, are being carried out of the building behind them on stretchers, literal collateral damage for what will eventually become the war stories around which they will assemble the pieces of their public self image; their life’s story... their personal "brand".

It’s all about me, even when it isn’t.

And what of Jeremy? The kid about whom this song would really be, if Vedder were any kind of poet? Well... Jeremy shares more than a little in common with Vedder’s Pacific North West Grunge Rock competition, Kurt Cobain, doesn’t he?

Consider, for example, the slim literary virtues of “Jeremy” in comparison to the stark perfection of Nirvana’s “Something in the Way”. Cobain manages to convey so much with so little. Even the chorus, which consists simply of the words “something in the way” repeated eight times with a kind of call-and-response emotional counterpoint, manages to convey a sort of narrative drive.

Of course, Cobain is dead now, and Pearl Jam continues to tour. They were even inducted into the Rock and Roll Hall of Fame this year, by none other than David Letterman, a last minute replacement for Neil Young.

Ah, what do I know, anyway... Maybe Eddie Vedder is really a very nice guy. The band sure stuck to their guns in their fight with Ticketmaster, that's for sure. You can't really get the full measure of a band that's been around, and productive, for almost 30 years from just one bad song. It's not Pearl Jam's fault that "Jeremy" struck a chord in the popular imagination...

But jeez oh man, is it EVER a garbage song.
Posted by Jerky LeBoeuf at 8:13 PM 2 comments:

STREAM THE NEW GODSPEED YOU! BLACK EMPEROR UNTIL SEPT 22

The latest offering from Montreal's legendary ambient multi-artist co-op (and long-time Jerky fave) Godspeed You! Black Emperor, evocatively titled Luciferian Towers, is a magnificent slice of drone-tastic aural majesty, and you can stream the entire project for free until the album's multi-format release on September 22, 2017. 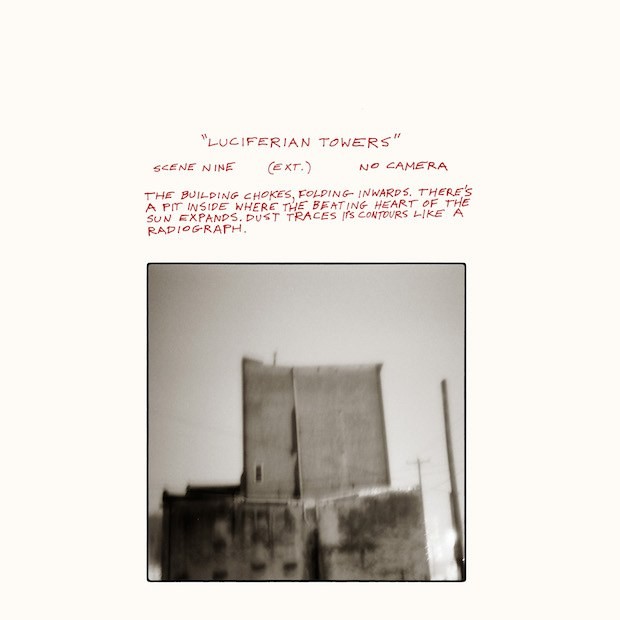 Oh, and thanks to our pals at Noisey for the heads-up about this.

Posted by Jerky LeBoeuf at 10:39 AM No comments:

Thanks to Ultraculture for bringing this to our attention, as well as for their touching, brief remembrance of one of the last living Beat archetypes.

Posted by Jerky LeBoeuf at 8:06 AM No comments:


The above video is excruciatingly short, but it's still exciting to see all the upcoming episode titles for the fourth season of Black Mirror, and little snippets from each. It's amazing how much information can be packed into such a compact bit of video, isn't it? I'd say there's even something a little bit "Black Mirror" about it!
Posted by Jerky LeBoeuf at 1:49 AM No comments: