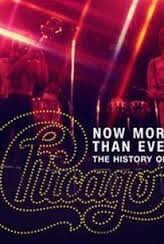 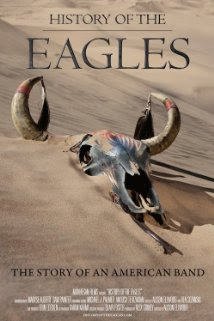 THE HISTORY OF THE EAGLES / NOW MORE THAN EVER: THE HISTORY OF CHICAGO ~ Over the last couple of weeks, I've spent a combined total of nearly six hours watching these documentaries about two of the most successful bands in the history of popular music: The Eagles and Chicago. Odd thing is, I didn't much care for either band prior to watching these in-depth, decades-spanning, warts-and-all explorations of their career highlights and lowlights... and now, after spending so much time with both bands, I still don't care for their music. At some point in both docs, the bathos gets to be a little difficult to swallow: "Waaah! We had too many hits! Waaah! The cocaine was too pure! Waaah! The groupies were too beautiful!" Both movies do an admirable job of chronicling the clash of monumental egos, the back-stabbing management shenanigans and record company rip-offs, and the obligatory late career comebacks, always suffused with a tinge of regret and, at the very least, one or two left-behinds who are unable to rise above the hard feelings generated by all the drug-fueled drama and chaos. But you can really see how much of what would turn out to be the worst parts of the 1980's were presaged by some of the seedier undercurrents in the popular culture of the 1970's. Before watching these, I'd seen the "Blue Jean Committee" episode of the Bill Haider/Fred Armisen parody series Documentary Now (IFC), and it turns out they were way more gentle and soft than they could have been. So, yeah... both these docs were a hard slog. But it could have been worse. It could have been a 4 hour documentary about Uriah Heep. 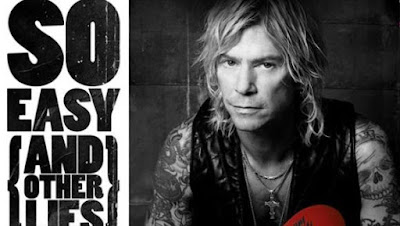 It's So Easy and Other Lies ~ Whoever convinced Duff McKagan that getting (kinda) sober, having two kids, and developing a mid-life obsession with martial arts is the stuff gripping biographies are made of... that person did the Guns and Roses/Velvet Revolver bassist a great disservice. I mean, the Duffster seems like kind of a nice guy and all, but this... this flick is an embarrassing enterprise on all fronts. From the idea of having Duff up on a stage, reading (slowly, haltingly) from his own recently published biography, to having him be surrounded by musicians providing a bed of cues and vamps that build towards what should be moments of great catharsis, only to have those moments be something utterly banal, like "we had another hit record!" Everything is so disconnected in tone that it leads us, the viewer, to feel completely alienated from Duff's life as he lived it. Actually, come to think of it, maybe that perfectly realized alienation makes It's So Easy the most true-to-life rock documentary ever made! 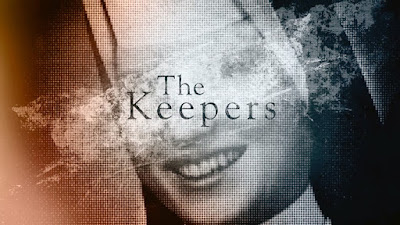 THE KEEPERS ~ Ryan White's ridiculously complex, infuriating, and disturbing documentary series dares to stare deep into the heart of darkness for hour after life-sucking hour. He might as well have called this one Trigger Warning: The Series. I won't bother giving you the details. This is, after all, a bullet review. If you're partial to the wave of Scandinavian Noir books, movies, and TV shows that popped up in the wake of The Girl With the Dragon Tattoo, then you'll probably dig The Keepers. If you liked Making of a Murderer, you'll find White opening up a whole new bag of tricks for this outing. Either way, if you do decide to watch this, try to remember what Nietzsche said about staring into the abyss. Small bites... and maybe take a Jim Carey break between each episodes. I recommend Dumb and Dumber.

KARDASHIAN: THE MAN WHO SAVED O.J. SIMPSON ~ I suppose the success of ESPN's incredible documentary series O.J. Made in America made this documentary look into the life of the man who may have been instrumental in Simpson getting off inevitable. Surprisingly, it didn't make me vomit into my own mouth. Your mileage may vary. 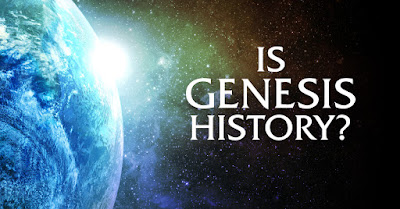 IS GENESIS HISTORY? ~ There's an old publisher's cliche about how any news story or book title in the form of a question can usually be answered with an emphatic: "NO!" This most definitely turns out to be the case with Is Genesis History?, a competently produced but also profoundly dishonest attempt to frame the creation/evolution question as one of Deep Time orthodoxy versus the possibility of rapid Earth changes. The former is portrayed as Charles Darwin piling errors atop the foundation of 19th century geologist Charles Lyell's folly (Deep Time), while the latter is shown as being HIP! and FRESH! and backed by much beautifully photographed and convincingly argued (for the layperson) evidence. A brief perusal of online critiques of this film indicate that people who actually know what they're talking about find it even more offensive than just plain old activist atheists do... and we all know what a grumpy bunch THOSE guys are. Anyway, if you have no interest in checking out rebuttals afterward, I'd probably just skip this one. It's basically really well made Christian Fundamentalist propaganda... and who needs that in their lives?
Posted by Jerky LeBoeuf at 8:48 AM No comments: 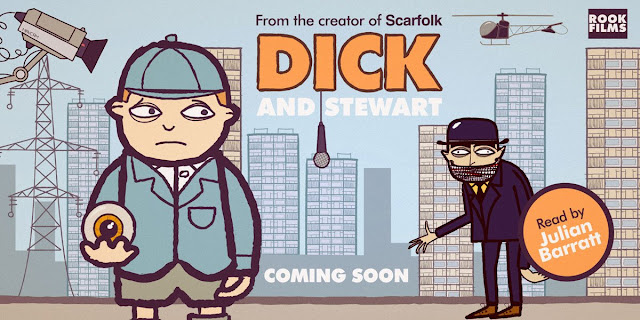 From the twisted madman who brought you the hauntingly bizarre Scarfolk Council website and book and the jazz-flavored genius behind The Mighty Boosh and Mindhorn (see our review) comes DICK and STEWART! Watch this space for updates!
Posted by Jerky LeBoeuf at 8:04 AM No comments:

OH, HELLO!'S GEORGE ST. GEEGLAND AND GIL FAIZON BACK AT THE Y!

If you haven't yet watched Oh, Hello! on Broadway on Netflix yet, or even if you have, you should check out the not so dynamic duo's return engagement at the 92nd St YMCA, to get your first taste (or an extended second helping) of their signature, rapey brand of aging New York "values". The funniest, most drug-centric comic team since Cheech and Chong, hands down! L'Chaim!


If you're as big of a fan of these two as yours truly is, then you've probably already seen their first visit to the 92nd St Y, in which they wax nostalgic about their legendary prank show Too Much Tuna, how "the Dersh" stole the show at the "Screaming About Israel" conference, and the joys of SUNY Yonkers campus life. Mazel-Tov!

Posted by Jerky LeBoeuf at 8:18 PM No comments:


Read more about the production of this film, and the innovative release partnership with Valve/Steam, which allows you to download many of the raw elements of the film to create your own version, including extended full takes, voice over tracks, all the way down to digital wireframe figures that you can customize.
Posted by Jerky LeBoeuf at 2:22 PM No comments: 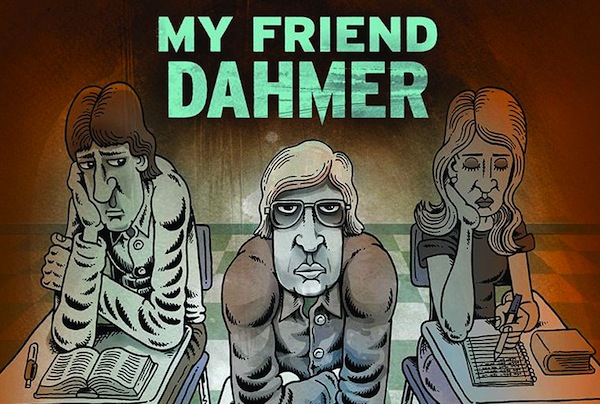 MY FRIEND DAHMER
A Graphic Novel by Derf Backderf

Jeffrey Dahmer has always struck me as an outlier among the grisly menagerie of celebrity serial killers that bubbled up from North America's subconscious and into the world of tabloid television back in the Reagan/Bush era. Ted Bundy, Henry Lee Lucas, Richard Ramirez and John Wayne Gacy all seemed unambiguously evil.
There was something different about Dahmer. His obvious relief at being apprehended and his apparently sincere remorse - he had no reason to lie, as he was going to be spending the rest of his life behind bars no matter what - stood in sharp contrast to his aforementioned cohorts, most of whom basked in the Satanic afterglow of their despicable deeds, courting media attention and reveling in their hard earned notoriety.

Enter John “Derf” Backderf, whose semi-autobiographical work has extensively chronicled the middle-American punk rock experience, and whose long-running comic strip “The City” has been a mainstay of metropolitan alt.weeklies for years. Derf’s unique visual flair, his familiarity with the milieu, and his solid storytelling chops would, in and of themselves, be enough to make him a good choice to bring the story of Jeffrey Dahmer’s formative years to the printed page. Add to this the fact that he was there, that he witnessed these events with his own two eyes, and that makes him uniquely suited to the task.

You see, the title of his book isn’t just some writerly conceit, a flourish of artistic licence. Backderf really was there, in the woody suburbs of Bath, Ohio, as one of the small group of people who counted themselves among Jeffrey Dahmer's "friends". And his wonderful book helps to explain, without ever excusing, how a damaged young boy could turn into a truly tragic monster.

Even the most ardent of serial killer aficionados is bound to find something new, here; some tantalizing new bit of trivia, or insight into the origins of Dahmer’s malfunction. I won’t do potential future readers the disservice of spoiling any of these. Instead, I will simply offer this endorsement: My Friend Dahmer is a worthy addition to the genre of serial killer lit, and as a graphic novel, it is a major milestone, perhaps one of the decade’s finest. Anyone wishing to learn about the life and writing of the massively influential Modernist writer Franz Kafka will find a wonderful guide in this beautifully illustrated, very well researched and engagingly written biography.

Crumb is the undisputed master of the form, and it’s clear that he enjoyed his subject here. He is equally adept at portraying (relatively) mundane incidents from Kafka’s day-to-day routine as he is at vividly bringing to life many of the horrid images from Kafka’s most important works, many of which Mairowitz aptly describes in brief but illuminating capsule summaries.

This is one of those rare works that should appeal to serious Kafka scholars, students looking to bone up on the subject, and newbies who want to get acquainted with the author before delving into his work. 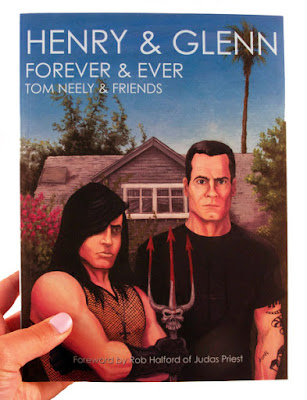 HENRY & GLENN FOREVER & EVER
By Tom Neely and Friends


This second collection of stories about the fictional relationship between hardcore punk/metal icons Glenn Danzig and Henry Rollins may be an extended, inside joke, but it’s a great joke, well told - both narratively and visually - in an intriguing variety of ways.

Bringing together all of the second wave of Henry & Glenn Forever mini-comics, the book also features a full color gallery of cover art all done in instantly recognizable comic book styles, and more than half the book is made up of previously unpublished material.

The quality of the artwork varies, of course, but some of the work on display here is truly exceptional. One particularly excellent tale (my favorite in the collection) involves a mythical re-imagining of Danzig’s infamous backstage encounter with an overweight roadie who, after being viciously shoved by Danzig for making an “impertinent” request, knocks the diminutive rocker unconscious with a single punch. This graphic version of that oft-viewed encounter had me laughing so hard I had to put the book down and take a brief break, making it worth the price of admission all on its own.

Not that there aren’t any other good stories here - there are plenty. In fact, the second half of this weighty collection (over 250 pages) is, if anything, superior to the first half; so if you find your interest waning on first read, stick with it. Or hell, just jump right to the stories in the second half if you want; it's not like this is a chronological collection.

Bottom line, if you’re a fan of either Danzig or Rollins, you’ll find plenty here to appreciate, and you’ll be fending off your buddies’ attempts to “borrow” (i.e. steal) the damned thing.

Posted by Jerky LeBoeuf at 6:40 AM No comments:


In recognition of his being awarded the Nobel Prize in Literature for 2016, Dylan eloquently appraises the impact that great literature has had on his songwriting, in particular Melville's Moby Dick, Remarque's All Quiet on the Western Front, and Homer's Odyssey. Whether or not you think Dylan was deserving of the honor (personally, I'm ambivalent), his acceptance speech is worth listening to.

UPDATE: Turns out he plagiarized his speech from SparkNotes.
Posted by Jerky LeBoeuf at 10:26 AM No comments: