HOUSE OF X / POWERS OF X (THE FULL SAGA) REVIEW 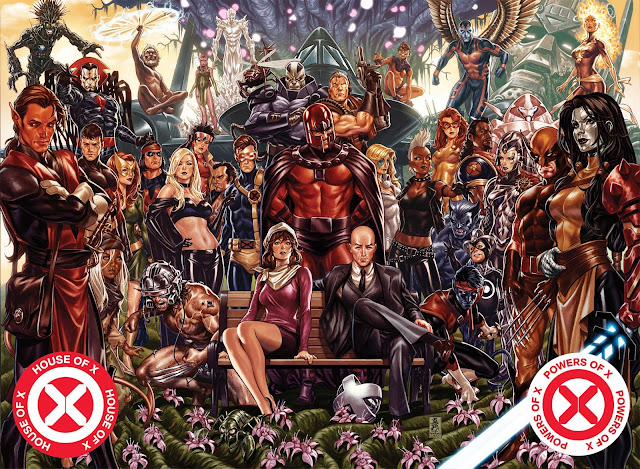 Well now, this is an interesting case. After years of neglecting (some would say flat-out sabotaging) the X-franchise out of spite over not having access to these one-time flagship superstars for their movies, Marvel’s comics division has finally decided to rehab, retcon and revamp everything mutant-related, coinciding with the moment Disney got the rights back to use all those characters in the MCU. What a stroke of luck!

To tackle the monumental feat of untangling the ridiculous mess they’ve made of things, Marvel cancelled every ongoing X-book and tasked their chosen writer—Johnathan Hickman—with creating a new foundation upon which all future X-titles would build. They also gave him carte blanche to do with these characters as he saw fit. Whatever he came up with would constitute the new Year Zero for Marvel’s mutants. So, here’s what Hickman came up with…

Two limited series, each six issues long, each featuring some of the best artwork yet produced by both Silva and Larraz, coming out over a twelve-week span between July and September of 2019. But they’re not just two separate series! Oh no. They’re two series meant to be read together in a special, specific, irregular rotation!

You know what? Explaining the structure will take longer than just reading an issue, so if you want to catch just a glimpse of the lengths to which Hickman has gone in order to complicate that which needn't have been so complicated, check out this Wikipedia page on both titles—House of X and Powers of X—the latter of which should actually be read as “Powers of TEN”, which is yet another unnecessary over-complication that isn’t half as clever as Hickman seems to think it is… particularly when he’s making huge mistakes that throw the whole narrative out of whack.

Anyway, House of X covers the first few weeks of the new mutant “present”, which involves the establishment of a homeland for mutants on the island of Krakoa (which is, itself, a fully conscious mutant, and a member of the ruling council). Krakoa is capable of producing flowers that have incredible powers, and Professor X has come up with a plan to barter pharmaceuticals created with these botanicals (they extend life by a ridiculously precise five years, and cure almost all “diseases of the mind”) to get homo sapien sapiens to at long last leave homo superior alone. Of course, for mutants, these flowers have the power to create, like, buildings, or even entirely new landmasses in the middle of the ocean, as well as instantaneous teleportation jump-points (even to the moon!), among other things.

And then there’s a whole sub-plot about formerly minor-league mutants suddenly being elevated to elite, even Omega status, due to Hickman finding ways to make them super-useful somehow. Key among these being the ridiculous character Goldballs, whose power, up until recently, was the ability to emit golden colored basketball sized balls from his chest with a certain amount of concussive force, and who now, as part of a five-mutant squad—given the super-creative team name “The Five”—holds the key to literal mutant immortality, which itself is the end result of such precariously patchy, under-baked wish-fulfillment fantasizing that it makes some of Hickman’s worst decisions in his awful Secret Wars series seem philosophically sophisticated by comparison. It all pushes the whole suspension of disbelief thing to the absolute breaking point, and beyond.

But that’s the New Way now, dig? And hey, at least it allows Hickman to send a team of beloved, classic X-men characters (Cyclops, Jean Grey, Wolverine, Nightcrawler and a handful others) on a suicide mission into outer space, where those nasty old humans (with participants from SHIELD, SWORD—aka Space SHIELD—AIM and even HYDRA!) are hatching up yet another genocidal plot to annihilate all of mutant-kind in the form of a Sentinel that is even bigger than the Master Mold that murdered millions of mutants on Genosha not so long ago… a MOTHER Mold that shits out Master Molds for breakfast, or something.

Anyway, this team of mutants, none of whom behave at all like the characters we’ve come to know and love, all get to sacrifice themselves heroically, only to be “brought back” in the goofiest way possible. And then the Krakoan council exacts “mutant justice” on Sabertooth. And then all the mutants party like it’s 1999. Seriously. It's even hinted at that Scott, Jean and Wolverine are now in an open, polyamorous relationship.

And, wow, does it NOT feel like everything is in its right place.

In many ways, Powers of X is the more successful title (at least, when it’s not dealing with any mutants that we may formerly have cared about). That’s because it features some genuinely interesting speculative concepts about the potential future of AI, the possibility of encountering alien intelligences embodied in such constructs, the consequences of being biological when confronting a hyper-advanced consciousness that is kind of disgusted by that, etc.

It’s enough to make me think that, if given the chance to create his own characters and build his own universe, Hickman might be able to produce work of lasting value and genuine worth. Unfortunately, giving him the X-men to play with—particularly considering that all this stuff is now considered canon—has resulted in an unmitigated mess that is, if anything, worse than what he started out with.

My main reason for saying this is because these X-men books are not about the X-men. If you’re not now, and have never been, an X-men fan, then you needn’t worry about why that is. If, however, you are (or were) one, then you should go into these series understanding that the main characters aren't Cyclops, Wolverine, Storm, Beast, Nightcrawler, etc. Hell, Mister Sinister and some dude named Exodus get more face-time than the vast majority of past X-team superstars in this book. Instead, the main characters are Xavier, Magneto, and former secondary character made pivotal linchpin mutant powerhouse Moira MacTaggart.

MacTaggart’s evolution here is probably the best idea that Hickman came up with for these books, and it’s too good a surprise (and too over-complicating a story element) for me to describe in detail, here. Besides which, a pretty good summary is included in the above-linked Wiki page. Or, heck, why not just watch this Youtube summary of the whole debacle, as put together by someone who liked it a lot more than I did? It’ll give you a different perspective, at least. Besides, I’m tired of thinking about all this.

Oh! Two more things before I let you go. First, the artwork in both books is some of the most polished work I’ve seen in Marvel superhero books in recent years. The renditions of the Mother Mold and future Nimrod super-Sentinels in particular really captured my imagination. The other thing is Hickman’s trademark use of weird information-rich visual guides like pie charts, blueprint schematics, timelines, and other such things… I know people have complained about their overuse in these titles, but I felt they at least helped to let us know WTF was going on from book to book, so I appreciated them.

Now, enjoy the video!
Posted by Jerky LeBoeuf at 1:14 AM