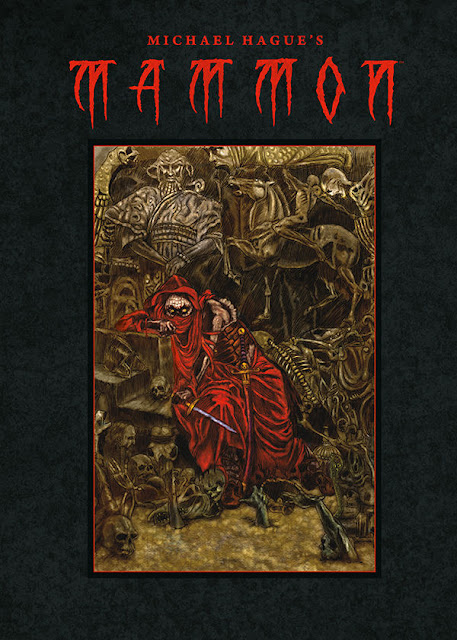 With Dark Horse's recent release of renowned fantasy illustrator Michael Hague's millennia-sweeping Decadent/Gothic epic vampire graphic novel Mammon, a new high water mark for illustrated horror has been set, and I imagine it will be a long time before it's bested.

Simultaneously beautiful and brutal, Hague's narrative begins in the early 1920's, following a journalist, Mr Meeks, whose obsession with vampires brings him to the attention of a reclusive, wealthy, Eastern European aristocrat who promises to reveal all he knows about the subject, as long as Meeks agrees to trust him unconditionally. Anxious for adventure, Meeks eventually meets his mysterious benefactor, who goes by the name Mammon.

To reveal more about how Mammon unfolds would rob the reader of the great pleasure of the story's unfolding. Suffice it to say that Meeks soon becomes Mammon's amanuensis/apprentice, and has to reckon with his host's bizarre double-transgression, which includes an absolutely twisted conversion story in which monsters formerly in league with Satan embrace the power of Christ... but on their own, incomprehensibly vile terms.

.So, if you've ever wondered what a full-fledged graphic novel by, say, 19th century Decadent Satanic fin-de-sciecle artist Felicien Rops might have looked like -- put together in a beautiful hardcover package, with the greatest attention paid to aesthetics -- wonder no more. Mammon is a top notch entry in a genre you probably didn't know you needed in your life. Serious horror aficionados owe it to themselves to reckon with this work on both the literary and artistic levels. Hague has produced a masterpiece.
Posted by Jerky LeBoeuf at 7:06 PM