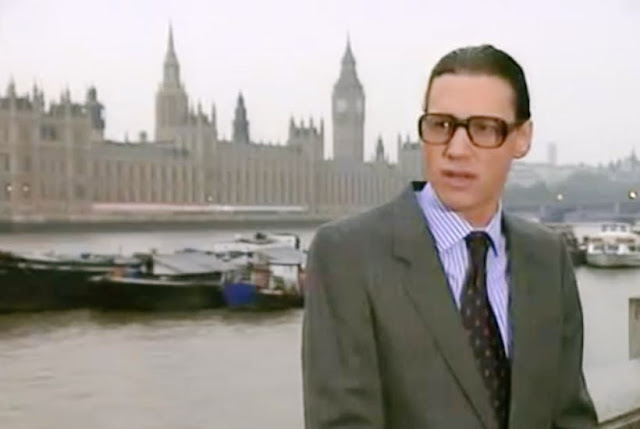 David Butterfield's Spectator UK article "How Brass Eye skewered our hysterical media age" is an excellent look back at one of the most iconic projects by the single most original satirist of the 20th century (and beyond): Chris Morris.  It begins:

It took less than three hours – but in six late-night, high-octane blows the self-assurance of the British media was irredeemably shaken. The attack was long coming and much deserved. Since the attack’s medium, like its target, was televisual, the show was predictably passed from pillar to post and held back for more than a year. But two decades ago, in 1997, Brass Eye finally aired on Channel 4. Its impact and legacy remain unparalleled in the annals of British comedy.

For those too young or too cloistered to have seen the show, its character resists description. Think of a bewildering cocktail of Newsnight and the Book of Revelations, liberally spiked with MDMA. Its presenter, Chris Morris (playing himself, among a host of other tortuously-named characters), steered the show like an end-of-days prophet, a captain standing unruffled at the helm of HMS Universe as it sinks into the mire. Despite the parodic, pyrotechnic graphics, the hysterical headlines and the absurdity of its stories, the format had the cocksure swagger of a slick, high-budget news revue. Unsuspecting viewers could be forgiven if they were roped into believing its twaddle-ridden dystopia.

Turbo-charged with sharp suits and messianic zeal, this apocalyptic take on Britain under last-gasp-Major had the disturbing ring of truth.

It neither was, nor is, easy viewing. At every turn, Brass Eye grasped the nettles few would or could: AIDS, animal rights, pornography, drug abuse, race. Yet its approach was not moral grand-standing or strawman napalming. Instead, it played out these infinitely complex issues – partly through actors, partly through earnest but unassuming talking heads – to reveal the infirm and often hypocritical positions of the commentariat.

While Brass Eye made fools of the politicians and celebrities who fell for its hoaxes, its one continual target was itself: the no-nonsense, black-and-white, world-resolving tribunal of current affairs.

The episodes’ subjects suggested an innocuous survey of contemporary society, providing the springboard for urgent, if bizarre, campaigns. A decade before the term ‘virtue-signalling’ was coined by Joseph Bulbulia, Brass Eye showed the great and good of British society climbing over one another to exhibit their support of a cause – any cause – from the woes of Karla the Elephant (whose depression had caused her head to become lodged in her rectum) to the wrongs of Heavy Electricity (which can fall from the sky like an ‘invisible lead soup’, reducing its victims to eight inches in height). At all turns, Morris deployed the shrill language of the supercilious reporter, albeit fed through a mangle and tumble dryer: ‘themoralmometer’, ‘braintanglia’ and ‘roboplegic wrongcock’ give a sense of his inimitable neologisms.

Morris threw himself wholly into the fray. In the ‘Drugs’ episode, he wandered the streets of Notting Hill asking an increasingly bemused dealer for ‘Yellow bentines’, ‘Triple-sod’ and ‘Clarky Cat’. Despite the obvious nonsense of the context, many keenly flaunted their anti-drug credentials. David Amess MP was so shocked by reports of the synthetic Czechoslovakian drug ‘Cake’ that he questioned the Home Office minister about this dangerous ‘made-up drug’. (Hansard of 24 July 1996 enshrines the moment.) Other eager campaigners – Noel Edmonds, Sir Bernard Ingham, Bernard Manning and Rolf Harris – seemed unperturbed by the fact they were holding (literally) cake-sized pills throughout their soliloquies.

The response of the press – an indirect casualty of the assault – was universally negative: rather than reconsider their histrionic over-simplification, they found fresh fuel for that fire. Halfway through the series the Daily Mail asked of Morris, ‘Is this the most hated man in Britain?’ At the Baftas, Brass Eye was, paradoxically, a booed nominee.

Despite the show’s seismic shock, it seemed that after the series aired Brass Eye had disappeared from the world entirely. And it had – except for one of the most challenging half-hours in televisual history, and then the most complained about. In 2001, Channel 4 boldly aired a Brass Eye special dubbed Paedogeddon, a Crimewatch-esque rally against anything that could contain a scintilla of paedophilic fear. The programme emerged against the backdrop of the News of the World’s name-and-shame campaign, when panic ran wild – and even paediatricians came under attack. Amid the frenzy, DJ Neil ‘Doctor’ Fox was only too happy to assert, on national television, that ‘paedophiles have more genes in common with crabs than they do with you and me… Now that is scientific fact – there’s no real evidence for it – but it is scientific fact.’ Gary Lineker helped unravel surreal text-message slang attributed to paedophiles, Richard Blackwood warned of noxious and predatory keyboards, Phil Collins sang the praises of Nonce Sense, and Lord Coe held up before-and-after photographs of an offender, unaware that he held stills of Hall and Oates. The episode was complex and obscure in its satire: it caused outrage among press and politicians, and still leaves many scratching their heads. But as a distillation of the excited hysteria of the media pursuing stories of this nature, it’s right on the money.

There's lots of great stuff left in the article, as the above excerpts less than a third of it, so do keep reading to learn more about what history will surely regard as a canonical offering.
Posted by Jerky LeBoeuf at 3:15 PM