It’s been a LONG time since I’ve published a media diary. It’s not that I haven’t been watching movies and shows, reading books and comics, listening to new music or whatever. It’s just that I’ve had a hectic two months, including a significant, tragic, personal loss.

Some of you already know that my good friend Milton Zysman—a true Renaissance Man and an iconoclastic autodidact of the first order—passed away on September 1st, after waging a courageous battle against pancreatic cancer. He was 82 years old, had been totally blind for forty years, had been on thrice-weekly dialysis for almost as long, and yet he was stronger, smarter, hipper and more tuned in than the vast majority of my Generation X and Millennial contemporaries.

For the last four years, I’d been helping Milton put together his magnum opus, wherein he proposed to pick up the torch of Catastrophism, as best exemplified by Immanuel Velikovsky, and carry it further than it’s ever been carried before. This life’s work of his was to be condensed into a book called Unravelling Genesis, and since his terminal prognosis last December, we’d been working double time to finish before the arrival of the Grim Inevitable.

We gave it a game shot, we really did. But, unfortunately, we only managed to finalize six of the eight sections of his work. This leaves me and a handful of Milton’s learned associates with a lot of work to do, but do it we shall.

I’ll have a lot more to say about all of this in upcoming blog posts, but for now, I’d like to get back in the swing of things by posting a media diary. And so that is what I shall do. Let’s start with… 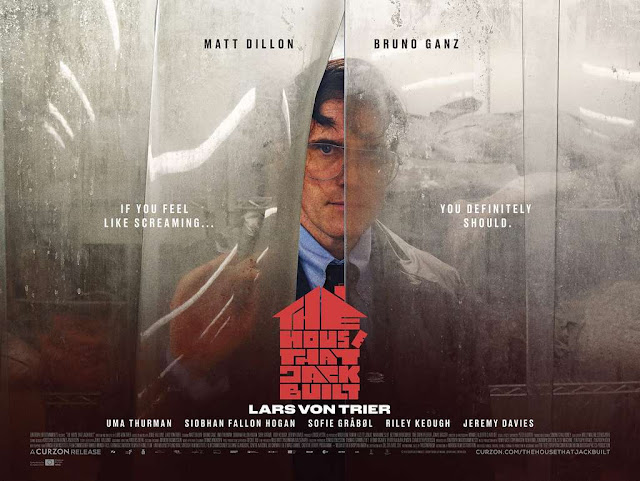 THE HOUSE THAT JACK BUILT ~ First things first, this film, the latest offering from inveterate controversialist Lars von Trier, is definitely NOT for everybody. As for myself, I have long admired von Trier’s work and consider him one of the great masters of contemporary cinema. I have found much to admire and value in everything that he does. Everything from his early work to his Dogme films, up to and including his more recent, harrowing output. Anti-Christ is one of the most misunderstood and undervalued films of recent decades, and I also firmly believe that Melancholia, one of his more restrained projects, is very much in the running for best film of the 21st century, so far.

Which brings us to The House That Jack Built. Right up front, I’ll say that I think it's one of his best films, period. Yes, it's grisly in parts. There are long scenes that, if you’re a sensitive soul (as I am), you will find excruciating to watch. Moments like the picnic scene, or when Jack's got Simple, one of his more sympathetic victims, bound and gagged, and he telegraphs what he's going to do to her (a shock motif that itself is borrowed from Bet Easton Ellis' shock novel and fellow “success de scandale”, American Psycho).

However, some of these self-same scenes are also moments of pure cinematic genius, building suspense brick by brick in a way that would have made Hitchcock proud. The film also contains moments of sublime beauty and, in the wraparound narrative wherein Jack relates his crimes and theories to a mostly unseen traveling companion named Virgil, some moments of profound, occasionally disturbing insight.

It’s also wickedly funny in parts. I am reminded of the people who thought Clockwork Orange was a horror movie. Like Kubrick's version of Clockwork, von Trier's House that Jack Built is among the blackest of satires. Its bad reviews I mostly put down to sheer cowardice on the part of today's milquetoast critiquing class, who are more interested in scoring Brownie points with a certain portion of their readers by cataloging the film’s myriad violations of basic, common decency. As if they really can't tell (or refuse to acknowledge) the difference between a movie having a misogynistic character and a movie, itself, being misogynistic.

Another frequent line of critical attack that I’ve seen taken against this film is to declare von Trier “arrogant” and “pretentious” for daring to suggest that his films have played a historic role in expanding the acceptable terrain of philosophical exploration in cinematic form. To that I say, you either accept that he’s right about the value and importance of his work, or you don’t. I do, so the scene in question (you’ll know it when you see it) not only didn’t bother me, it actually put a smile on my face. I appreciated von Trier’s willingness to set his hubris free, to allow it to take him where it took him.

As with Martyrs and Anti-Christ, I cannot in good conscience recommend this film to everyone. However, if you’ve got the stomach for a cinematic descent into Hell—in more ways than one—then The House That Jack Built is not to be missed. It’s a film that will be remembered and watched for as long as films are remembered and watched. 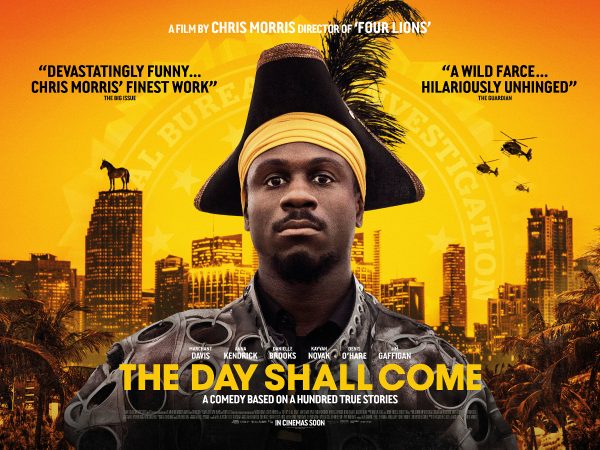 THE DAY SHALL COME ~ Speaking of satire, Christopher Morris is, in my opinion, a talent on par with Stanley Kubrick, and the Anglosphere’s single greatest satirist since none other than Johnathan Fucking Swift. His output has always been outstanding, beginning in the 90’s with surreal pranks and dada-style antics on the radio, followed up with some of the most revolutionary and controversial “comedy” television in the history of the medium (The Day Today, Brass Eye, the too-good-for-its-own-good Nathan Barley, and the absolutely terrifying Jam), leading up to 2010’s Four Lions, his magnificent debut feature film about bumbling Islamic terrorists in the UK.

And then… radio silence. Oh, sure, he directed a few episode of his pal Armando Iannucci’s excellent HBO series VEEP, and he’s made a handful of onscreen appearances (perhaps most memorably as the sinister boss-man Denholm Reynholm in The IT Crowd). But for six long years, we heard only snippets from the man. And then, a couple years ago, we learned that he was working on a new project. Another film! Slowly, information about this new project began to leak out in dribs and drabs. It was to be another terrorism-related film, but very different from Four Lions. It was to be set in the USA… Miami. It was to be shot in Dominican Republic. It was to be called The Day Shall Come. It was to star Anna Kendrick.

And then, last week, it came out. And I watched it. And I was underwhelmed.

Don’t get me wrong. It’s not bad. And it’s quite funny. And it has some important and true things to say about the moral rot, hypocrisy and idiocy at the heart of the post 9/11 War On Terror. It is also incisive about both racism in the USA, and the inherent insufficiency of the rhetoric and the attitudes that have risen up to confront these problems. And the jokes are good, and land with admirable regularity. It deserves to be seen by as wide an audience as possible… and I think a Black audience in particular would appreciate what it has to offer.

It’s just that, on first viewing at least, unlike most of Morris’ previous work, it wasn’t an unparalleled work of staggering genius.

So, what’s it about? Well, “based on a hundred true stories”, it’s about how the FBI sets up vulnerable, damaged people by offering them loads of money and weapons, and when the targets of their schemes show up to pick up what’s been offered, they arrest them, tell the world they stopped the next 9/11, lock them up and throw away the key.