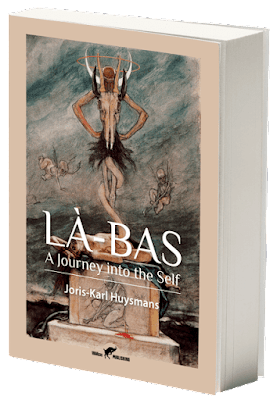 First published in Satanism-mad Paris, France, in 1891, Joris-Karl Huysmans' La-Bas -- frequently translated into English as Down There or The Damned -- is one of the key texts of the fin-de-sciecle literary movement, and belongs on the reading list of anyone interested in the occult's influence on the arts, and vice versa.  It also happens to be a cracking good read, which accounts for its inclusion in self-styled British occult expert Dennis Wheatley's venerable 70's paperback collection, The Library of the Occult.

La Bas was a huge success upon its release, and to this day remains Huysmans' second most popular work, second only to his popular Decadent masterpiece A Rebours (translated into the English as Against Nature), which itself was one of Oscar Wilde's favorite works, and is also extremely entertaining despite (or because of) all its over-the-top darkness and under-the-bottom cynicism.

I was planning on writing a full review to serve as a primer to La Bas, explaining its structure to any interested readers, but the introduction included in the Wheatley Library edition says so much of what I wanted to convey, I may as well just reproduce it here in its entirety:


The majority of British readers will be annoyed by the first chapter of this book and wonder what on earth it is all about; so a word of explanation is necessary.

In France, in the latter part of the last century, intellectuals were crazily absorbed in a bitter controversy between two schools of literary thought – the Romantics and the Realists. The idealistic novels of Victor Hugo were representative of the former: the descriptions of kitchen sinks and prostitution in Emile Zola’s works representative of the latter. People even fought duels on the question; and it is about it that the two characters are arguing.

But be of good cheer, reader. That does not last long. We are soon intrigued by particulars of women being visited nightly by incubuses and priests indulging in sexual perversions. It is, in fact, upon his accounts of Satanism in this book Down There (spiritual Hell) that Joris Karl Huysmans earned his right to a permanent place in the forefront of writers on the occult.

He was born in Paris in 1848, became one of the first Realist writers then, overcome by morbidity, turned to religion and, after becoming a lay-brother of the Benedictines, died in 1907.

The book embodies three inter-related subjects.
The author’s preoccupation with Gilles de Rais’s lascivious brutalities begets in him the urge to find out if similar satanic practices are still performed; so he persuades Madame Chantelouve to take him to the house of a notorious renegade priest named Canon Docre. Together they witness there the celebration of a Black Mass, and few finer descriptions of this obscene ritual have ever been written.

So there you go. I recommend it heartily, but watch out! Chapter 11 is insanely brutal and disturbing, as Huysmans refuses to let the reader off the hook when it comes to describing in vivid, grisly detail Gilles de Rais' heart-stopping brutalities against the most innocent of victims. This is an "old book" that retains its power to shock.

One final note, the edition pictured at the top of this post has a gloriously grotesque but still beautiful cover painting by the Belgian Satanic artist Felicien Rops, who has painted some of the more evocative images of surrealist decadence ever committed to canvas.

La Bas has long since passed out of copyright, so all you cheapos out there can download a free online version from this here list, which features copies in every file format you could want.
Posted by Jerky LeBoeuf at 9:24 PM